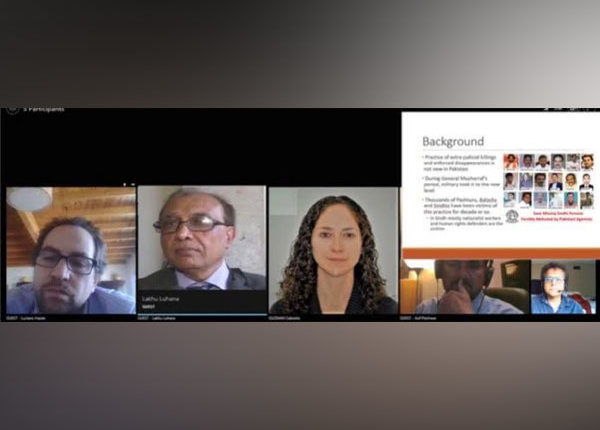 London [UK],  7 Morning India: A UN Working Group on Enforced Disappearances has sent several requests to Pakistan government to visit the country, especially Sindh province, to investigate the cases of enforced disappearances, but is still waiting to get permission.

This was revealed by the Working Group Rapporteur, Luciano A Hazan, while interacting with a delegation of the World Sindhi Congress (WSC), who attended a meeting with the UN Working Group on Enforced and Involuntary Disappearances (WGEID) through a video conference.

WSC presented a detailed overview of the new and previous cases of the enforced disappearances of human rights defenders in Sindh.

“The sole purpose of these abductions by the Pakistani Government is to silence any dissent challenging their policies of hegemony and appropriation of natural resources and lands belonging to the indigenous Sindhi people,” highlighted Saghir Shaikh of WSC in his presentation to the WGEID.

Shaikh further elaborated that these disappearances are carried out by the multiple security agencies, such as Military Intelligence (MI), ISI, and Rangers and police.

“All of these agencies operate with complete impunity!” he added.

Several dozen who have been released in the last few years experienced mental and physical torture. None of them have ever dared to speak up publicly, and almost all of them have resorted to the seclusion and life of shunning human rights advocacy altogether.

Despite enormous protests, campaigns, and petitions in the courts, this practice has not stopped. The delegation requested to send the WGEID team to visit Sindh to ascertain the issue and talk to those who have directly suffered.

Hazan informed that a formal request to visit the country was sent to Pakistan in November 2019 with a follow-up reminder in  20. The WGEID has not yet received a positive reply from the Government of Pakistan. Unless Pakistan does not extend a formal invitation, WGEID cannot visit the country.

Hazan, assured the delegation that they will continue their best efforts to seek the release or declaration of whereabouts of all the missing persons in Sindh and Pakistan.

It was also resolved that WSC will continue working with WGEID by providing data and other relevant information.

The WSC is based in the UK, USA, Canada, and Sindh and is one of the most prominent human rights advocacy organizations for Sindh and Sindhis.

The main objective of WSC is to create a better understanding within the international community about the persecuted status of Sindhis in Pakistan and about the Sindhi peoples’ struggle for human rights, including the right to self-determination. Morning India