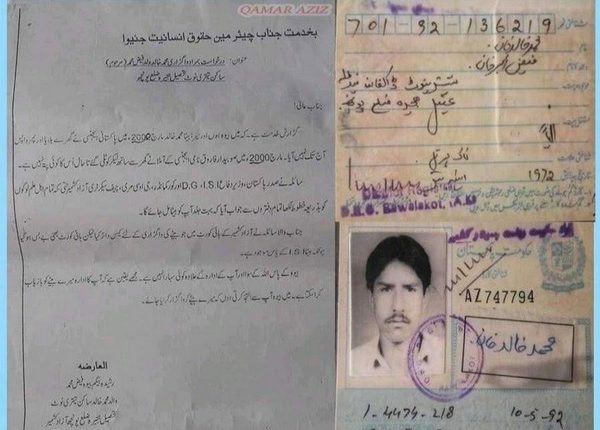 London [UK],  7 Morning India: Mohammad Khalid, a resident of Hajera town in Pakistan occupied Kashmir (PoK) is still missing even 20 years after he was allegedly kidnapped by Pakistan’s Inter-Service Intelligence (ISI) for refusing to join state-backed jihad in the region.

According to Mohammed Khalid Khan’s Mother, Rasheeda Begum, a widow of Faiz Akbar Khan, her son was abducted by Inter Services Intelligence of Pakistan twenty years ago.

No one has seen or heard of Mohammed Khalid Khan since that day. His worried mother has written letters to people in power, and appealed many local politicians, but nothing helped to get her son back home.

In order to keep the Kashmir pot boiling, the ISI trained Pakistanis and the local people of PoK to fight India in Kashmir. Mohammed Khalid Khan was among many other local people who were urged to join the on – going ‘Jihad’ in Kashmir.

Sources said that Khalid refused to fight a proxy war by giving his reasons, including serious family problems. This was regarded as dissent; and dissent is intolerable crime in view of the secret agencies, as that can encourage other people to do the same.

All those who openly disobey the orders of secret agencies face threats, intimidation, blackmailing, false cases, allegations; and when all this does not work, they are silenced.

Rasheeda Begum wrote letters to President of Pakistan, Director General ISI, Minister of Defence, GOC Murree, Chief Secretary of Pakistan occupied Kashmir. She was assured that her son will come back home soon.

Sources said desperate mother approached the High Court for help, and because her son was in custody of the ISI, High Court was helpless. The ISI intended to give a loud and clear message to people of PoK, never show dissent to us. Morning India