Nonagenarian Krishna Saksena Comes up with her Ninth Fiction; Smriti Irani Releases it 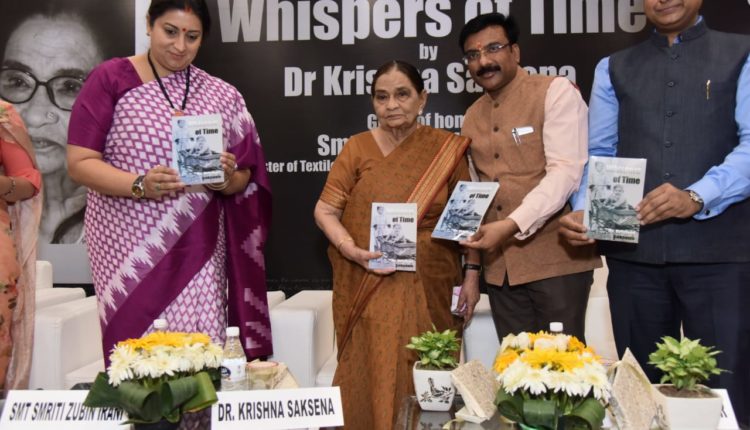 New Delhi, July 1, 2019: It is never too late to set a goal or to work for a new dream, this has been proved by Dr Krishna Saksena, the 91-year-old author of a fiction called ‘Whispers of Time’. The book, published by Prabhat Prakashan, was released at India International Centre by Union Minister of Textiles and Minister of Women and Child Development Smriti Irani.

This was Dr Saksena’s ninth book which is an effort on her part to condense nine decades of her life experiences, realizations and observations into the form of fiction adopted from some facts. Characters adopted in the book are real and so are the events. The book is written in a very simple style which is writer’s great asset.

Author had been witnessing the three generations in her life and found a great difference between the three. If the first was too strict and severe in clinging hard to traditions, the second had softened down to new values of love and helpfulness. In a way it was a beautiful world of togetherness. Third generation is proud of its growth in technology and the new discoveries that are made by the present generation. Women are moving fast towards walking out with men equally; steps should be taken for their empowerment.

Speaking about the book, Dr Saksena said, “The book aspires to capture and present the change in the value system from one generation to next. Our society has morphed from large joint families to small nuclear ones, women are stepping out more and more to work shoulder to shoulder with men, even become the leaders. The middle class has grown and wealth while the disparity of wealth has increased. Our country of 40 crores at the time of independence is now bursting at the seams with three times as many people. All this has put immense pressure on our value systems. Everyone who has read the book has reacted by saying “I can completely relate to it!” The occasion was also graced by Lady Kishwar Desai, an Indian author and columnist as special Guest.

Dr Saksena has had a brilliant academic career. She is the first woman in UP and amongst few in India to get her PhD in English Literature in 1955. She strongly feels that without the base of spiritualism, nothing will ever succeed in this materialistic world. So she well combines in her works spiritualism with materialism. A professor of Delhi University, she has to her credit a number of publications. Her works have a unique blend of modernity with tradition. Her language is too simple, her style attractive and contents are dealt with ease and sharpness. She offers to her readers difficult problems solved in an easy and convincing way.