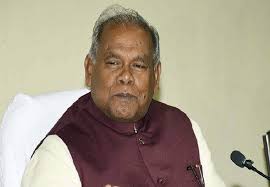 PATNA: Hindustani Awam Morcha (Secular) – HAM (S) president and former chief minister Jitan Ram Manjhi on Friday gave a hint that he might choose a separate course and go all alone in the upcoming Bihar assembly polls that are due in 2020.

Manjhi alleged that he was always cheated by others; hence it was better to chart out a separate course and go all alone than bank on others and get cheated at the end. He was talking to media persons on the occasion of party’s membership drive that was inaugurated on Friday.

He said that it was first the National Democratic Alliance (NDA) and then the coalition of Grand Alliance (GA) that used him and then cheated on him. Commenting on the issue of ticket distribution in GA during the recently concluded Lok Sabha elections, Manjhi alleged, “In the general elections that were held recently, his party was accorded three seats, but the fact was that in actuality his party contested only on one seat, while the candidates of Congress and RJD contested on the other two seats on his party symbol.”

Manjhi further said that his party members were dissatisfied with the ticket distribution during the LS polls and they were of the view that the party should contest the upcoming state assembly elections on its own if it really wanted to expand its base and identity in the state.

It is to be noted that Manjhi formed his own party in 2015 after leaving JD (U). He then joined NDA, as Nitish Kumar had severed ties with the NDA and had formed a separate alliance by the name GA in association with Congress and RJD. Soon after Kumar went back into the NDA fold, Manjhi left the alliance and joined GA and contested the LS polls as part of the same.