National Democratic Alliance (NDA) and United Progressive Alliance (UPA) with the Congress showing its predisposition to take the Maharashtra Navnirman Sena (MNS) in the UPA. But the Congress seems to be stumped by its former ally of the undivided Andhra Pradesh the All India Majlish-e-Ittehadul Muslimeen (AIMIM) that has offered Vanchit Bahujan Agadi (VBA) headed by Prakash Ambedkar to contest 100 seats out of 288 seats in the Maharashtra Assembly.

The Congress seems to be desperate to register a win in any part of the country as it is facing continuous drubbing with a few exceptions. So much so that even more than two third Congress members of the Goa merged into the BJP and the Congress is busy discussing who will be the next national president of the party after the resignation of Rahul Gandhi. The Congress is running the government in Madhya Pradesh and Rajasthan with wafer thin majority. The Karnataka government is also in turmoil that is also a major setback for the Congress.

The NCP has already expressed its concern for delay in the alliance talks due to indecisiveness in the Congress. Now, the state Cong 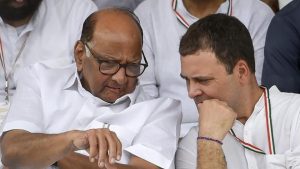 ress chief is decided but he is also in favour of taking MNS along. However, the MNS failed to make any mark in the past elections except the last election before the BJP government took over; it was assumed that the BJP-Shiv Sena had lost elections due to the damage done by the MNS. But after that election the MNS was completely wiped out to become a fringe political party.

In the 2014 Lok Sabha elections, the BJP had won 23 seats while its ally Shiv Sena has won 18 seats out of total 48 seats. Seven seats were won by other political parties. The state is all set to go to polls after around three-four months and the Congress is fearful that the party may not even get the 42 seats in the Assembly that it got last time. Actually the combined vote share of the BJP and the Shiv Sena in Maharashtra has crossed 50 per cent for the first time ever in the electoral history of Maharashtra, while that of the Congress-Nationalist Congress Party (NCP) has dropped to its lowest mark ever. Swabhimani Shetkari Sanghatana of Raju Shetti, which was part of the NDA in 2014 elections when the coalition won 42 seats in Maharashtra, contested as an NCP nominee this time round and lost to the Shiv Sena candidate.

On the other hand general elections have seen the rise of the Vanchit Bahujan Aaghadi (VBA), a combine of SC leader Prakash Ambedkar and the All India Majlis-e-Ittehadul Muslimeen (AIMIM), which has not only got 6.5 per cent of the votes polled but also snatched the significant Aurangabad seat from the Shiv Sena. The rise of the VBA is also a wake-up call for all established political parties and could have a significant impact on the outcome of the next Assembly elections in the second biggest state in term of electorate after Uttar Pradesh.

The contest for the assembly elections will be very interesting as this time round the political alignments are different. The BJP and Shiv Sena had fought a bitter battle during the 2014 assembly elections, winning 122 and 63 seats, respectively of the total 288 seats in the state legislature. The Congress had won 42 and the NCP 41. But this time round, the Shiv Sena and the BJP have already formed their alliance for the assembly elections, as they did for the Lok Sabha polls. The two parties will equally share the seats in the Assembly after the smaller allies of the coalition, such as RPI (Ramdas Athawale) and Rashtriya Samaj Paksha are accommodated. However, which party the post of chief minister will go to if the coalition wins is yet to be decided. It is being said that the decision on CM will be taken after MLAs are elected and the number will decide if there would be a BJP CM of Shiv Sena CM.

Indications of the Congress-MNS alliance started being talked about when MNS chief Raj Thackerey met with United Progressive Alliance chairperson Sonia Gandhi at 10 Janpath in New Delhi recently. Apparently the entire move is to counter the BJP-Shiv Sena alliance in the state which has decimated the Congress-NCP alliance in the state. Now, on the other hand All India Majlish-Ittehadul Muslimeen (AIMIM) has told the Vanchit Bahujan Agadi (VBA) headed by Prakash Ambedkar to contest 100 Assembly seats out of 288 seats in the state. 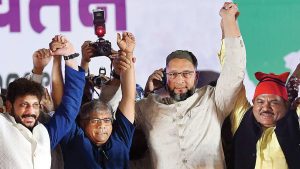 This is to remind that instead of managing its own support base, the Congress attempt to steal into the vote banks of other political parties might prove to be counter-productive. Dalits and Muslims had been the core vote bank of the Congress for very long time besides a few other sections in Maharashtra but a new social engineering of Assaduddin Owaisi and Preakash Ambedkar has brought Dalits and Muslims under a new platform which helped the alliance to snatch Aurangabad Lok Sabha seat from the Shiv Sena. If they are planning to field candidates on 100 seats in Maharashtra that will have definite impact not only on the Shiv Sena-BJP alliance but will harm more to the Congress-NCP in the state. If Muslims are also driven out of the Congress and the NCP, who will bring them seats. AIMIM and VBA are buoyant about the success story of Aurangabad.

Bringing the MNS into the Congress-NCP alliance is a double-edged sword, if it will bring some Maratha votes to the alliance then it will drive away not only Muslim vote but north-Indians votes as well from the Congress-NCP combine and AIMIM and VBA combined are ready to take Muslims hand in hand and north Indians will go to the BJP-Shiv Sena fold. These two communities are decisive in certain pockets in the state. Dalits will also be lured by Prakash Ambedkar. So the attempt of the Congress and the NCP will go in vein if the VBA accepts proposal of the AIMIM. The AIMIM was an old ally of the Congress but they had developed differences and parted ways just before 2014 Lok Sabha elections.

On the other hand, the BJP and the Shiv Sena are working on their original plan with the Shiv Sena taking the hardliner stands like racking up issue of Ram Temple while the BJP talking about taking everyone along. The alliance has been able to deliver best-ever performance in the 2019 Lok Sabha elections but Assembly elections are always fought on different issues altogether. The BJP-Shiv Sena have decided much in advance that they will be contesting equal number of seats leaving others much behind in terms of polls strategy. But the Congress appears to have been found caught napping however AIMIM-VBA too is pro-active.

Giorgia Andriani ‘not acting’ in ‘Dabangg 3’