New Delhi, July 27, 2019: Indian literature is pioneer of all literature. Tribal literature of India is unique. Our art, culture, tradition and literature have developed from ancient civilization. Odia literature originated from Odra tribal”. There are many social and cultural similarities between different tribes, he stated, adding that Odia there are many reflections of tribal society and culture in Odia literature, said, Shri K. Sreenivasa Rao, Secretary, Sahitya Academy while inaugurating a seminar at KISS Deemed to be University at Bhubaneshwar, Odisha.

The two-day National Seminar on Tribal Society and Culture of Odisha as Reflected in Literature was organized jointly by KISS and Sahitya Academy on 26-27 July 2019 in the Conference Hall of Higher Education Campus at KISS University, Patia, Bhubaneswar. 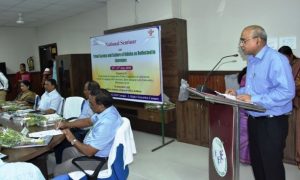 Eminentfiction writer and Jnanpith Awardee Dr. Pratibha Ray said, “Man is a part of nature. Therefore people are so natural. We belong to one tribe – that is Human Tribe. We have to go through Indian literature which is inspired by Vedic root. In ancient Indian literature, there was a reflection of tribal culture and character. Without tribal culture, Mahabharat and Ramayan would not have been completed.”

In his keynote address Professor Harekrushna Satapathy, VC, KISS Deemed to be University said, in Odia literature there is enormous reflection of tribal culture and tradition. Bijayananda Singh, Convener, Odia Advisory Board, Sahitya Academy presided over the inaugural function, while Dr. P. K. Routray, CEO, KISS proposed the vote of thanks. Many experts and writers of tribal literature from various parts of the country joined and participated in the seminar.

Punjab to have ‘Cycle Valley’ with outlay of Rs 300 crore