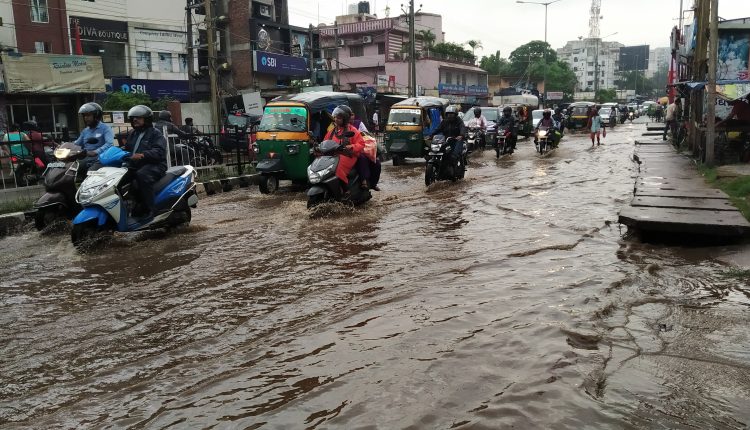 RANCHI: As heavy rains lashed the capital since Sunday morning, water logging was observed at many major roads and also a number of residential areas across the city. At least calf high water logging was observed at a patch of Kanke Road, not even a kilometre away from the CM residence, creating troubles for the passersby. Same situation was observed at Piska More and at many other areas.
A local resident, Avinash Kumar said that this is a scene every time it rains heavily. There is a drain which is clogged as a result of which the water overflows on the road and people have to suffer a lot. Two-wheeler riders face a major problem during this situation as they are splashed by the other vehicles moving around them, he added.
A worse situation is seen in front of Urdu Library, a part of the MG Road, where the water from the colonies, which is situated on a height above the main road flows down to the road and having no outlet, collects on the path of vehicular movement creating problems for commuters.
In areas like Piska More and the route leading from Nirmal Mahato Chow to Chadri, water logging proves to be dangerous as craters have formed on both these roads and in case of water logging, becomes accident prone.
Hemant Kumar, a local near Piska More said, “Every time it rains these potholes fill up with water and we often bikers falling as they are not aware of the craters. This is something that should be dealt on a priority basis by the municipal corporation.”
Those areas having open drains become even more problematic as passersby cannot distinguish between roads and drains during water logging and there are often cases when bike riders fall in the drain and injure themselves.
According to figures with the RMC, out of the 14,01,808 meters of drains in the city, only 5,57,390 meters is covered. The remaining, 84,4,112 meters of drain is prone to water logging during the ongoing monsoon and may prove to be dangerous for commuters.
Mayor Asha Lakra while talking to MORNING INDIA said that the Ranchi Municipal Corporation is working towards solving the problem. “The open drains have been identified and they will soon be cleaned and covered. As far as water logging is concerned, we immediately send labourers to unclog drains wherever we get the complaint of water logging on road,” she added. Meteorological Centre, Ranchi informed that there is a prediction of rainfall for the next four days. The centre informed that between June 1 to August 17, Ranchi witnessed around 440.8 mm rainfall which is 38 per cent less than the average rainfall observed during this time, which is 715.5 mm.