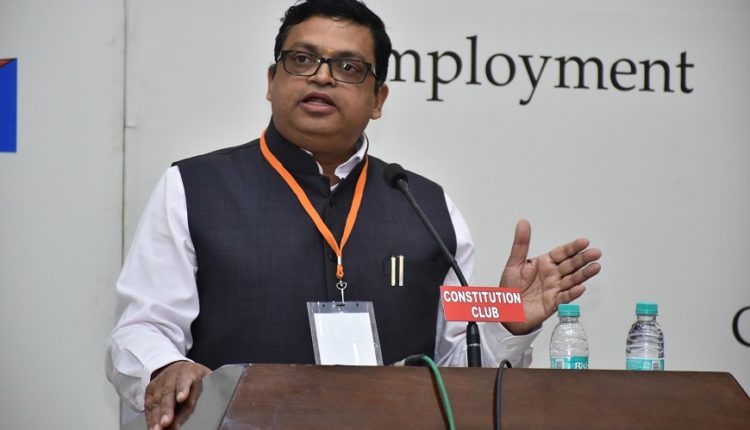 Bharatiya Janata Party (BJP) national spokesperson Gopal Krishna Agarwal has been articulating on most difficult issues for the party. In an interview with Morning India National Bureau Chief Vinod Kumar Shukla, he outlined not only the future planning of the government from employment generation to Kashmir Issue to make India a $5 trillion economy but also his party’s strategy on Assembly elections in some important southern states. Excerpts of the interview:

Q. Right from the very next hour of the formation of the Modi 2.0 government, it has started working not only the PM but the entire government has 100-days agenda in mind. Your comment!

See! People have shown faith in the Modi government and yes government started working the very next hour of taking over. The reason being that in the last six months of the Modi government’s previous tenure, every ministry was asked to get ready with the roadmap of the next 100 days. Various department and ministries have prepared a blue print for it that what steps should be taken by them. So as soon as the government took over, implementation on these things started. Second important thing is that when manifesto was made for 2019 Lok Sabha elections, a comprehensive field work was done by all of us under the leadership of Amit Shah ji. Almost around six crore people were directly contacted and their feedback was sought that what short of changes they want in the government policies. What are the things that the government must do for people? All these things have been incorporated in the BJP manifesto that was handled by a team of the BJP leaders.

Q. What are the special plans for 100-days agenda of the government?

The most important thing at the moment is agriculture sector on which the government needed to focus maximum. Another issue is how to generate employment in the manufacturing sector and the third important thing is generating about Rs 1 lakh crore investment in the infrastructure sector. The government is working to create resources along with keeping a check on fiscal deficit. All these things came to us including the fact that how the government would help MSME sector where lots of opportunities are available.

Q. Amit Shah has taken over as the new Union Home minister. There were several issues concerning Home Ministry even there was a resentment concerning this but the way Amit Shah is treading over issues related to reservations and delimitation in J&K, it seems to be a complete shift in the policy!

Lots of people are saying similar things especially after Amit Shah’s two speeches in Parliament. Both the speeches of the home minister were very categorical on the issue of Kashmir. There was clarity on the Kashmir policy in his speeches. Shah has also said that in the past 65 years, there was a directionless policy on the issue. Local people supporting terrorists were provided with security, the entire channel for the terror funding was supported and financed by Pakistan but was not investigated. There was complete lack of willpower to curb cross-border terrorism. The most important thing is that he clarified his view on Article 370 and 35A  in Parliament saying Article 370 is temporary and 35 A is unconstitutional. They were brought in by administrative proposal and there is a need to change them. People living close up to 10 kilometers of the international boarder, their reservation and education are being addressed by the government and even the bill has been passed in Parliament. A roadmap with Rs 90 thousand crore budget has been announced by the PM for infrastructure so that how many IITs have to built, how many AIIMS will be started, how many flyovers, tunnels and roads will be built. There is a comprehensive Kashmir policy what the BJP thinks about it that was presented before Parliament.

Q. So you want to say that there is a comprehensive policy on Kashmir in which not only the development of Kashmir is in the agenda but also some tough legislative measures for the state!

What Amit Shah has recently said about Kashmir that Article 370 and 35A are legal issues; there is another issue that is cross-border terrorism. But the real issue is economic development of the state that some of the organization within the state were hampering. Another thing is that only three families of Kashmir are benefitted and this is continuing from very long. The BJP is talking about people’s participation and over 40,000 panchayats have joined the local body elections for the first time in the history of the state. This has ensured complete participation of people of the state. He talked about democratic outreach in J&K and the BJP has started a solid work and will keep on doing this further.

Q. There are many concerns to make India a $5 trillion economy, how would the government address it?

The government has a roadmap with solid fundamentals to make India a $5trillion economy. Economic survey tells 7 per cent GDP will continue but if we are able to take it to 8 per cent, the growth will be faster. Export growth is over 13.5 per cent and foreign exchange reserve is all time high at $412 billion. There are certain areas of concerns that the government needs to address like water crisis. The PM has also talked about it and created a separate ministry for it. There is a need for water conservation and augmentation and that should be done with the help of MGNREGA to revive water bodies. The PM in his ‘Man Ki Baat’ said that we are able to store just 8 per cent of the rain water rest 92 per cent goes waste. We need to protect and revive all kinds of water bodies including rivers by every means including recharging them. Huge investment in the field of Agriculture is being talked about. Another big concern is that private investment is not growing at a fast pace for that liquidity demand and consumption demand has to be created. The government will definitely do something for it. Income tax leakages are being blocked; online assessment being facilitated, GST, digital economy, banking sector reforms and tax to GDP will also increase in the days to come.

Q. The government failed to achieve the target of recovering Rs 1 lakh crore under GST on several occasions. Your comment!

As far as GST is concerned, Rs 1 lakh core average target collection was fixed. It was 1.13 lakh crore in the month of April after that also Rs 1 lakh crore threshold was crossed but this month it was Rs 99 thousand crore. The government is trying that people providing fake invoices for input tax credit are checked and centre-state revenue will also be increased. Disinvestment is also going to become one of the big resource generation as lots of PSUs that are mostly loss making or they are working in the non-core areas. So around 19 such PSUs have been identified whose disinvestment the government has already planned. There are nine PSUs that will be disinvested through stock exchange listing.

Agrarian crisis has become big in the country, what the government is doing in this regard?

Even Piyush Goyal ji had talked about agrarian crisis. Suresh Prabhu was working for it. We have to align with the producer for our export and import policy. It means, we have to align with the needs of farmers. Till now the policy has been that export was not allowed even if the production has exceeded so consumer was getting things at cheaper rates. But this was hampering farmers getting the right price. We were working from the past six-eight months that export import policy to align with producers. We will also try to reduce input cost.

Out industrial production has gone down in the past two three months due to country getting into election mode. And some of the schemes of the government has also come standstill which had slowed down the manufacturing sector but they have to be revived. We have fixed the target for ease of doing business at 50th position; we will try to achieve that. Banking sector reforms will also happen so the NPAs of the banks are recovered which will further help those disbursing loans. MSME sector, loans under MUDRA scheme, the limit has increased from Rs 10 lakh to 20 lakh. The government has plans to encourage manufacturing whether by bringing interest rates down, demands have to be created by investment by the government. The government is doing all these initiative.

Q. It is being talked about that to boost growth; some economic reforms are in the offing?

Q. The BJP has once again become active for Assembly elections in Haryana, Delhi, Maharashtra, Jharkhand and West Bengal. The BJP has already started working in Andhra Pradesh and Telengana, what is your strategy?

Amit Shah ji is the master strategist. During the 2014 Lok Sabha elections he worked on 120 Lok Sabha that the BJP had never won. He focused on them and the BJP has been able to win 74 out of them. This is a big achievement. We already have 303 seats in the Lok Sabha and if we have to move further, we will have to focus in states like Telengana, Andhra Pradesh, Kerala and Tamil Nadu. These are the states where we will have to augment our strength. We would like to strengthen organizational structure and connectivity with people. We need to take care of fundamentals of the local populace. So the BJP is focusing on the southern states where presence of the party is still not as good as in other states. We are planning to increase our membership by 25 per cent across the country.