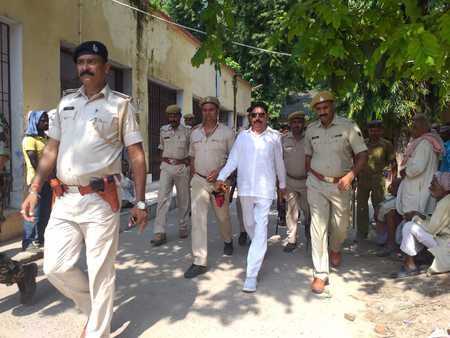 PATNA: Independent Mokama MLA, Anant Singh was sent to Beur Jail on Monday after his two-day police remand in AK-47 recovery case ended today. He was brought to Barh Court in tight security arrangement. The court ordered to send him to the jail. The police can file application in the court for his remand again as per the requirement. Team of doctors also conducted a medical check-up of Singh before being forwarded to jail. His medical condition is fine.

It is to be mentioned that, during a raid at Anant Singh’s house at Ladma village under Barh sub-division on August 16, the police had recovered AK-47 rifle, two hand grenades and 15 round cartridges from there. The police tried to arrest Anant Singh in this case, but he fled from his official residence. After six days on August 23, Singh had surrendered in Saket Court in New Delhi. He was produced to Barh Court on last Sunday from where he was sent to Beur Jail.

Known as Chhote Sarkaar in Bihar, the gangster-turned-politician, Anant Singh is the first person to be booked by authorities under the newly strengthened Unlawful Activities [Prevention] Act (UAPA). His supporters claim the independent MLA from Mokama has become a fall guy for Bihar chief minister Nitish Kumar after the legislator fielded his wife from the Munger Lok Sabha seat as Congress nominee against the Janata Dal (United) pick Rajiv Ranjan Singh alias Lallan Singh.

Though Anant’s wife Neelam Singh lost the election by a massive margin, associates say the bitterness created during the polls appears to have cost Anant dearly. Bihar police booked him under sections of the UAPA following the recovery of an AK-47 rifle, 22 live cartridges and grenades from his ancestral house.

Half of old traditional brick kilns close from Sept 1