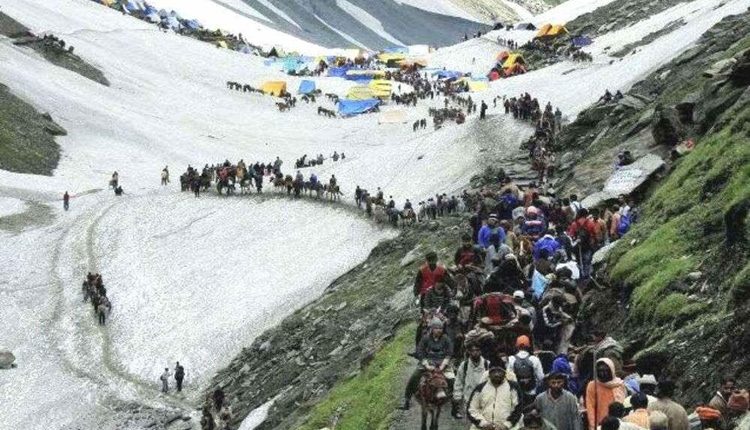 The holy Amarnath Yatra for the year 2019 officially commenced on Monday, 01, July, with the first batch of pilgrims making their way towards the holy cave from the respective base camps in Baltal and Pahalgam and Governor Satya Pal Malik participating in the ‘Pratham Pooja’ (first prayer) in the cave shrine. It was reported that he prayed for peace in the state.

Over the last 20 days the Yatra has witnessed a record foot fall that has crossed the two lakh mark on the 16th day itself, which is the highest number recorded in the last four years. It is notable here that barely half the period of the Yatra has been covered so far since it is scheduled to culminate on August, 15, the auspicious day of Raksha Bandhan.

Elaborate security arrangements, of a degree much higher than what was seen during previous pilgrimages, have been put in place this year. These include state of the art technology like bar-coding, Radio-frequency identification (RFID) tags, satellite monitoring, live CCTV of national highway showing real-time footage and use of drones etc. Due to the Bar-coding each Yatri and each vehicle is accounted for all the time. The boots on ground have also witnessed an increase with more companies of the CRPF being inducted.

Special Quick Action Teams of the Army and the CRPF have been earmarked to guard the highway. A three-tier security of Army, JK Police and CAPF is in place to secure the routes of the Yatra right up to the holy cave.

The attention being paid to security was also noticeable from the many reviews carried out at the highest level. On June, 26, the Northern Army Commander, Lieutenant General Ranbir Singh visited units deployed for security of Amarnath Yatra on the axis of Baltal and Pahalgam for a last minute check. This was followed with a visit by Union Home Minister Amit Shah who also went through a detailed security brief. “We have made adequate security arrangements. Whatever has to be done for the security of the Yatris will be done whether they are in the camps or moving in the convoys. We are using technology to best effect,” said Dilbagh Singh, DGP JK Police on commencement of the pilgrimage.

The pilgrimage has been moving smoothly since then; it was suspended only for one day on Monday, 8, July, as a precautionary measure following a strike called by separatists in the Kashmir valley to mark the third death anniversary of former Hizbul Mujahedeen terrorist Burhan Wani.

Under the circumstances, a statement by Mehbooba Mufti, former chief minister of the state alleging “inconvenience to the common people” comes as a surprise. “Amarnath Yatra is taking place since years. But unfortunately, the arrangements done this year are against the people of Kashmir. It’s causing a lot of trouble in the day-to-day lives of local people. I would like to request the governor to intervene in this,” she is reported to have said. She was probably referring to a restriction on the use of Jammu-Srinagar highway by civilians during Amarnath Yatra.

It would be prudent here to remind Mehbooba Mufti that on 10 July, 2017, when she was chief minister of the state, terrorists attacked a bus carrying pilgrims of Amarnath Yatra on the road and killed Eight of them, while eighteen were injured.

There should be no doubt that the only reason why terrorists, especially the foreign variety, are not striking is because they are not getting an opportunity to do so. In order to make the pilgrimage incident free the people would be expected to adopt laid down security protocols willingly and proactively in the larger interest. The slight inconvenience is for their own good and for the good of the pilgrims. The people should also keep in mind the extreme inconvenience and great stress being faced by the security forces in ensuring day and night vigil over such a vast area from Jammu to the cave shrine 24/7 and wholehearted cooperate with them. By so doing they would show their appreciation for the challenging task that is being undertaken and keep the morale of the forces high.

None other than Mehbooba Mufti has raised any issue of inconvenience. The civilian officials, in fact, are quite satisfied with the manner in which the Yatra is progressing even as they pray fervently that it remains peaceful and incident free till the very end.

Junaid Mattoo, the Mayor of Srinagar has made a reference to the steps being taken at the civilian level to ensure security and comfort of the Yatris. “Security forces apparatus and police grid are taking all precautions. They are on their toes. As far as the city is concerned we are reviewing all hotels, public facility and conveniences to ensure that Yatris are comfortable and secure. Temples and Dharamshalas are being taken care of in the city as several visitors visit them during Yatra,” he has said while speaking of the arrangements. Despite the turmoil of militancy in Jammu and Kashmir, the importance of the Amarnath Yatra never diluted. Lakhs of pilgrims from all parts of the country visit the shrine every year regardless of the security threat. Even during the peak of terrorism, the number of pilgrims was always more than what the Government could allow due to security reasons and time constraints; it continues to be so and this year is surpassing all records.

Notwithstanding the religious sentiments of the people, politicians of all shades and hues do not relent from politicising the Yatra as the when an opportunity presents itself. Year after year, the conduct of the Yatra is subject to avoidable political rhetoric with security taking centre stage. It cannot be overemphasised that implicit adherence to security protocols is imperative. It would be best to ignore such political utterance that can jeopardise the smooth conduct of the Yatra and follow laid down security protocols to ensure safety and security of all concerned.

Colonel (Retired) Jaibans Singh, a reputed analyst of Indian defence and security affairs, has an abiding interest in issues related to national security, internal security, geopolitical developments and defence strategy in the context of the nation. His area of specialty encompasses Jammu and Kashmir, Pakistan and China. Jaibans Singh is also the Editor-in-Chief of www.defenceinfo.com, a popular web portal on defence news and views

Real Estate Vs the Environment: Threats To Biodiversity in India